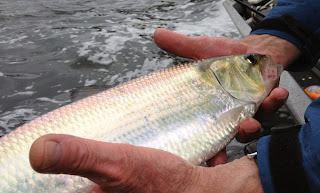 The excitement and thrill of a hard fighting Shad is fun for anglers of all skill levels and ages.  Water Time Outfitters offers a unique half-day fly fishing trip in Oregon City – just minutes south of Portland, Oregon on the Willamette River for Shad.  Cast flies from the platform of a steady jet boat and tease the strike of one of thousands of shad swimming up river.

Each spring in the month of June the Willamette and Columbia Rivers are flush with American Shad. American Shad were introduced into the Sacramento River system in California in the 1800s. Shad have spread throughout many river systems on the West Coast of North America. There is currently a large shad population in the Columbia River. In recent years, shad counts at Bonneville dam on the Columbia River east of Portland have ranged from over two million to over five million fish per year. Spawning shad return to the Columbia and Willamette Rivers in May and June. Unlike many introduced species, it has not been confirmed that American Shad have serious negative effects on the environment or other native fish species in the Columbia. 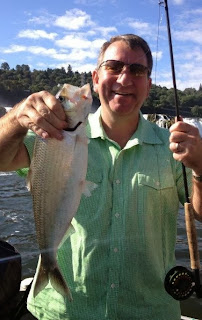 Fly anglers love to catch Shad; they are often called the “poor man’s Tarpon” because they are strong fighters and exhibit thrashing jumps like a giant Tarpon.  Shad typically weigh 3-5 pounds but have been caught up to around 8 pounds.  They are known for their aggressive takes and spirited fight.  While some find Shad a delicacy most in the NW practice catch and release or use Shad for Crab bait.

Light tackle is best for Shad and when water conditions allow- use of a 5 weight rod maximizes the fight. Floating lines with sinking tips are the norm but with high water some heavier sinking lines might be required.
Most days fly fishing action is consistent if not brisk.  Some 4 hour sessions experienced anglers can expect to hook 10-30 fish per person.

Fly selection is usually quite simple; being in the herring family and primarily a Plankton eater, flies should be small.  Bright flash and varied colors from orange, red, pink, chartruese, yellow, white among others work well. 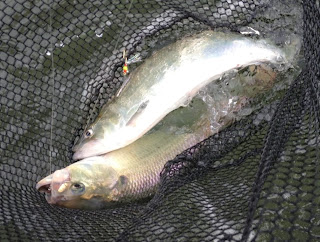 Doubles while Shad fishing is common!

To see for yourself what it is all about come join Water Time Outfitters on the Willamette River for a fun 4- hour session fly fishing for Shad in June.  All the gear is provided and waters and soft drinks are in the boat. If your just learning this is a fun way to get started.  Anglers of all levels enjoy the battle of the shad.

Winter Steelhead Fly Fishing Video that will Make You Drool!

10 Fly Fishing Tips That Surprise Anglers of All Levels

Fly fishing is a lifelong quest to keep improving, and a trip doesn’t seem complete without a great “Ah-ha!” moment. Here are some tips to help you find them.

Our free newsletters give you more tips,
strategies, and the latest news on how the
season here is shaping up!

Our free newsletter gives you more tips, strategies, and the latest news on how the season here is shaping up!