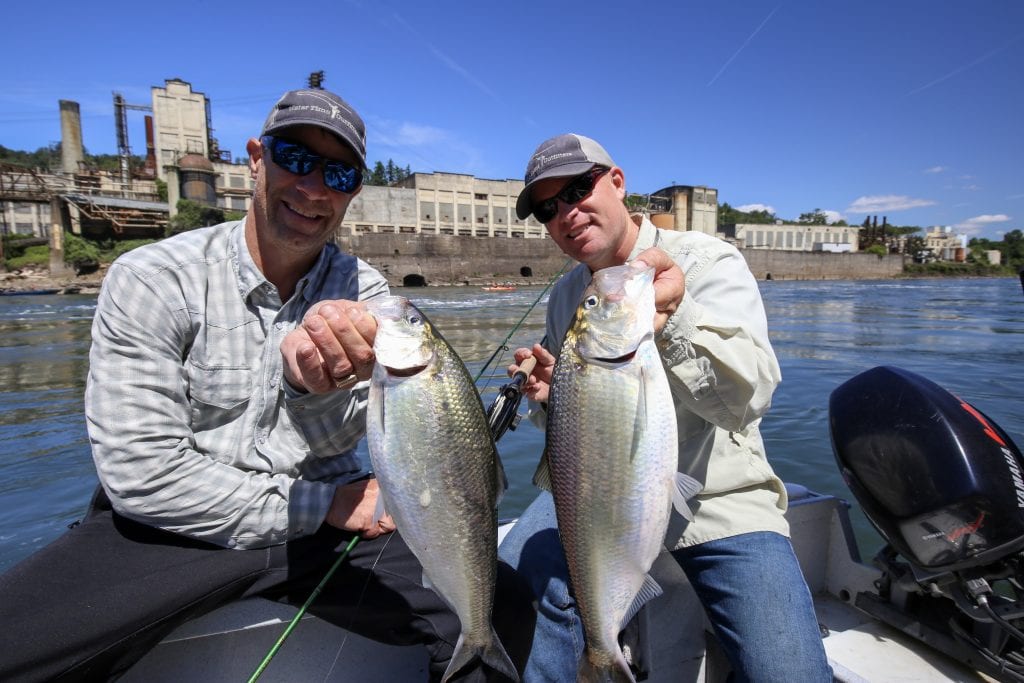 This year’s run of American Shad was one of the best in many years and the smiles on our customers faces reflected that daily!  The four hour fly fishing trips we offered this June were a smashing success as many anglers hooked fish until their arms were sore- no joking!  My new joke for the end of the day was that the trip didn’t come with IB Profin for those sore muscles after a session of shad wrestling.  This year’s run is just now starting to trickle down in daily passage at Bonneville dam at 7.1 MILLION fish.  The Columbia/Willamette system is the WORLDS LARGEST run of American Shad and it’s right here at our back door next to Portland and Oregon City.  Plan on joining us next year to get a taste of Oregon’s hottest fly fishing right here next to it’s largest city. 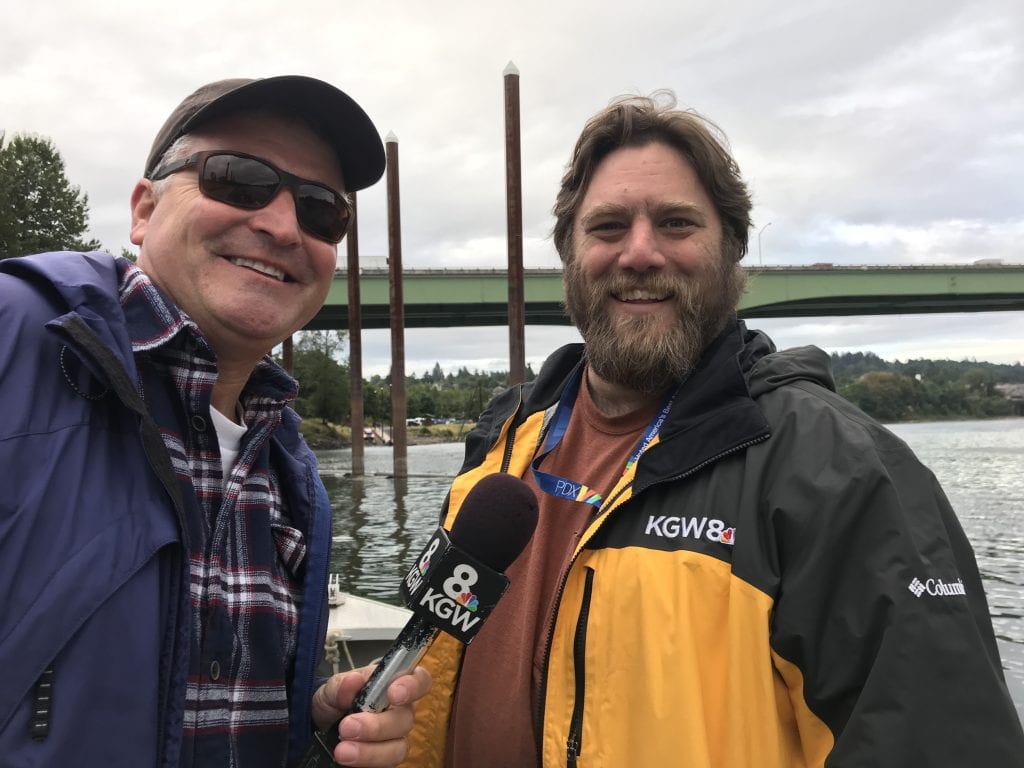 Tim Gordon from KGW news and Chad the camera man.

Here’s a news clip from KGW news with newscaster Tim Gordon when we did a live feed from the boat on the Willamette River.

You might also enjoy this quick editorial from a shad fishing client this year.  This group of guys has been joining us for a number of years and this year they upped the game.  They showed up with T-SHIRTS blasting the word SHADORAMA and had a mini-shad fishing tournament.  Here is their story and it’s a blast to read-enjoy! 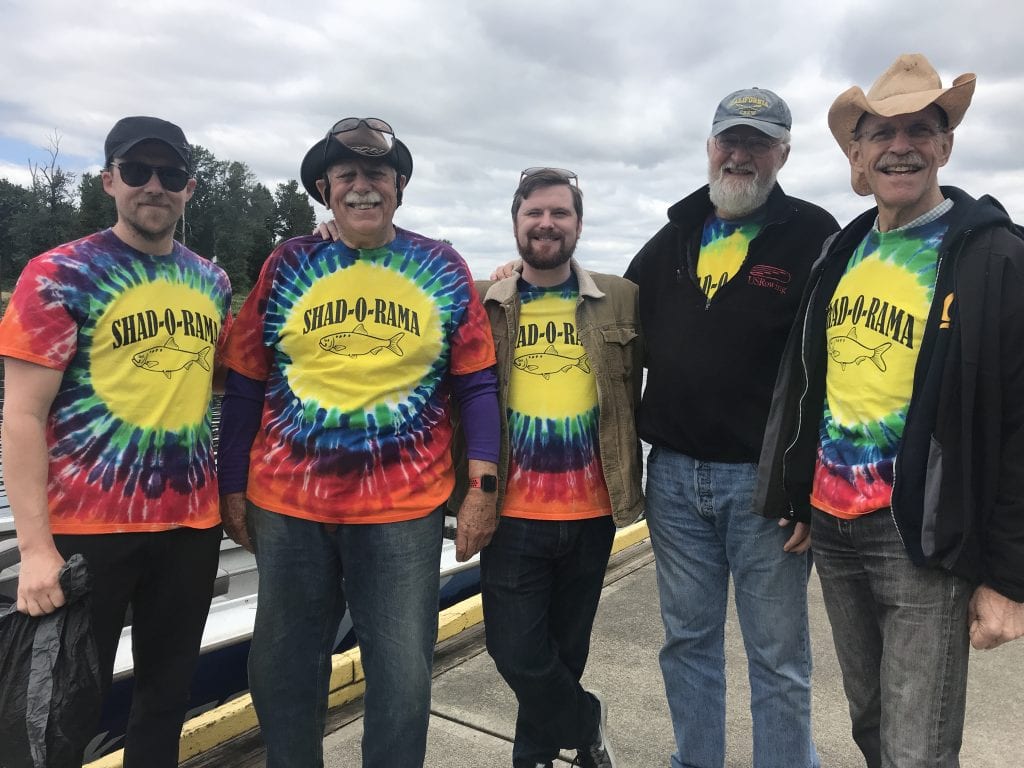 The Shadorama Group about to head out on the water…

This years, “Shad O Rama” dedicated to our beloved Crewmate, Mike Fletcher, was a resounding success! Dressed conspicuously in our  blindingly tie-dyed  custom T-shirts, we scared the fish into some astounding acrobatics! Guided by Rob and Todd of Water Time Outfitters, we took two 20′ jet boats near the scenic Willamette falls, the second largest falls in flow only to Niagara!  We tied them together and started the tourney. Since we had two generations represented, we paired off the youngsters, in the “baby boat”, Andrew Ellsberg and Jacob Pierce, against the gray haired, creaky joints and hard earned wisdom of the “Ship of Fools”.  An aptly named vessel, manned by Rick (Rice) Liebman, Steve(Bone Body) Pierce, and Bob “the Barge” Ellsberg!

As expected the young bucks jumped off to an early lead. Having the advantage of the best spot and a guide with a 12 inch reach advantage, they shot into a six fish lead. The “Fools” crew had a lot of trouble with slow reflexes, no discernible mobility, and kept losing everything in sight, until the Rice managed to land a monster. Then the battle set in for a “big 40” charge to the finish. The punks in the “Baby Boat’, got distracted, making sandwiches and trying to snag the giant sturgeon that leaped into  their lines.  They also were blocked by some terrific defensive fishing technique by the Barge, guiding his fish into their lines, and gave a space for the “Fools “ to pull even.  Then, after some great pointers by Rob, “The guide with the gift”, started their final charge to the tape. 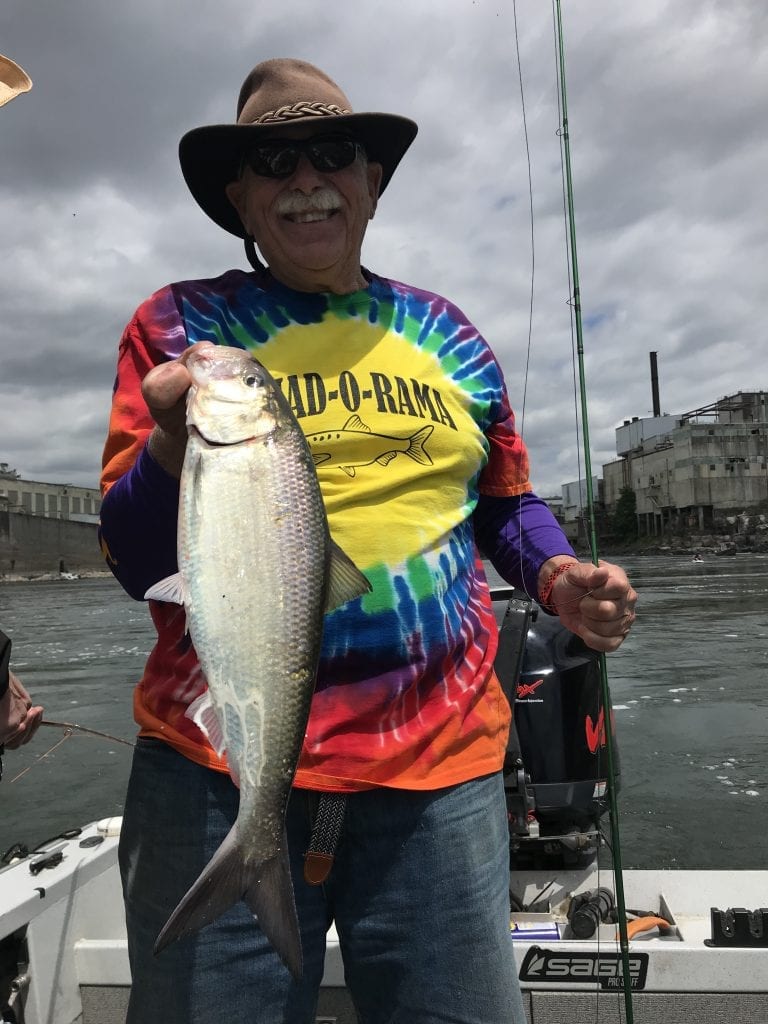 “Barge” one of the flounders of the “Shad-o-rama” event.

In the end, 41 shad were landed in four hours, 15 in the kids boat, and a massive catch of 26 by the aged masters. Kids averaged 7.5, while the trio of triumph, won with an astounding  8.66666… fish per angler! Real winners were the shad who started out with about a 90 percent escape rate! As we progressed our skills seemed to emerge and we were landing over half of the fish we hooked. Some epic battles, neat views of the falls and decaying paper mills and lots of ozone made for a great day on the water!

Our fish size ranged from 15 to 21 inches with the biggest fish a bit over two pounds.  Turns out the State record is 6 pounds, six ounces set in 2004 near where we were fishing. West Coast record Shad from California, (where the first shad were transplanted from the east coast over a century ago) was 7 pounds 5 oz. from the Feather River, just a few miles from Rice’s home town. On the east coast, they have monsters Shad lead by an 11 pound beauty caught in 1986 in the Connecticut river. All the shad on the east coast that spawn from Florida to Canada, feed in the Bay of Fundy which provides an amazing supply of plankton.

Delaware sponsors a bi-state tourney on the Delaware river and this years winner of the 20,000 dollar prize landed a 5.5 pound fish. The top ten were all over 5 pounds. So we have some work left to do! Join us in June next year!!! I’m considering boosting our prize money to 2 dollars!

Barge (one of the flounders of the event)