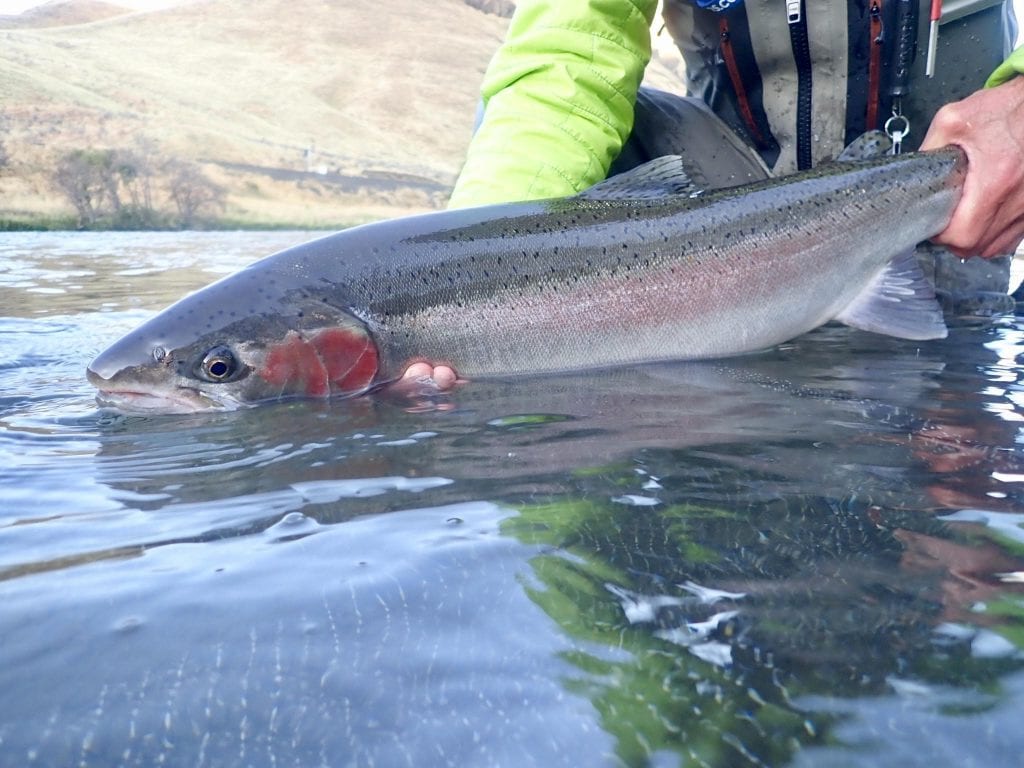 Wild Steelhead caught in the Deschutes River in September 2019.

September and October are prime time in Oregon with so much fishing to do there just not enough time!  It’s been a wet and cool fall here in the NW and that’s brought a beautiful white blanket of snow on the iconic Mt Hood which bodes well for winter snow pack.  Rivers have seen a few bumps in levels to bring in some fish on a few coastal rivers and the added rain had brought new green growth to the hillsides of the normally dry eastern half of the state.  Fishing has been a mixed bag of the good, bad and the ugly; here’s our report.

Oregon Coastal Rivers:  Good early rains sparked rising streams and cooling waters for most of the Oregon Coast rivers.  This helps bring in cutthroat trout and early salmon in some rivers.  While it’s been still early for a big push of salmon to arrive any big rain from now into November will bring in salmon on rivers like the Trask, Wilson, Nestucca and the Nehalem.  Returns for Chinook are forecasted to be low on most Oregon rivers this fall so be careful to read the updated bag limits.  Cutthroat fishing can be a blast now with small dries and wet flies swung on many of the Oregon coastal rivers with some favorites being the Nestucca, Nehalem and Necannicum rivers.

Clackamas River:  Early batches of coho have been arriving with the rain and some anglers are seeing decent success.  Get there early for the best bite and the first crack at the aggressive fish in the hole.  Expect coho to be in the slower water, back eddies and deep pools.  Watch for rolling fish to giveaway the location of a school of fish.  Summer steelhead are still around and spread through the entire system.

Deschutes River: Trout fishing has been a highlight here with the Euro Nymphing technique just killing it most days!  This has been a blast and a welcome distraction from the slower than normal steelhead fishing.  Just recently I was showing an angler how the technique worked and hooked three trout in three casts!  We’ve still been finding those big sea going trout but double down on the effort and plan to cover some water-numbers are low this year so you’ve got to work for them.  Best flies have been Crandall’s Devil’s Candy and unweighted leach patterns during the day.  Early morning floating line patterns like the Green Butt Skunk, Royal Treatment and the Street Walker are getting results.